Not Self but Country series 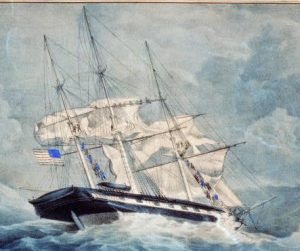 In 160 years, the United States Navy grew from one small ship to the fleet of one two-masted, wooden brigantine, to 6,768 ships. This world-dominating fleet included 28 aircraft carriers, 23 battleships, 71 escort carriers, 72 cruisers, over 230 submarines, and nearly 400 destroyers!

Not Self but Country is the unofficial motto of the US Navy. Its also the title of this book series of historical nautical fiction. Even before the United States declared independence from Great Britain, colonies sent their own tiny navies to sea in protection of their seaports. Also to raid English shipping. This series of novels tells the story of the men and ships that challenged the mighty English Navy – in stunning detail. 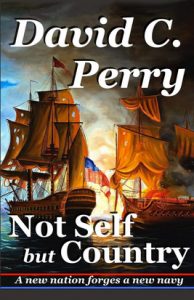 Not Self but Country – A new nation forges a new navy

Not Self but Country is a gripping seafaring adventure set in the late eighteenth century. Using naval terms and jargon of the day, David Perry has placed the reader squarely in the middle of the action. Overcome adversity and grow with John Paul Jones and other youthful mariners, destined to become leaders in the newly established Continental Navy. Sit in on the strategy meetings at Tun Tavern in Philadelphia with Franklin, Jefferson, and naval captains of the day.

Climb the rigging, let loose the sails, and feel the wind in your face as you pursue the enemy. Stand on the quarterdeck of Bonhomme Richard in the heat of battle, smelling the acrid smoke as the cannons lay barrage, and cringe when incoming balls splinter the timbers and hole the sails. Feel the pain of your fellow wounded patriots. There is no room for bystanders, so grab your cutlass, pistol, and hatchet and prepare to board when the order is given. The moment has come. When asked if he had struck colors, Commodore Jones shouted to Serapis, “I have not yet begun to fight.” – Chief Warrant Officer Tommy Robinson, US Navy, Retired -Author of Steely Eyed Killers of the Deep 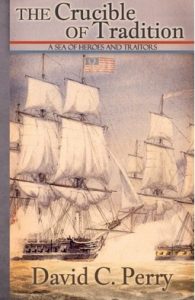 The Crucible of Tradition – A sea of heroes and traitors

“Another spellbinding nautical adventure from Dave Perry. If you love history, enjoy tales of life at sea, and are open to being completely captivated and transported to the beginnings of America’s maritime heritage, then The Crucible of Tradition is a must read for you. A must have for any nautical library!”  – Rear Admiral Tony Kurta, United States Navy (Retired)

“An illuminating account of the remarkable intrepidity of our nation’s earliest maritime adventurers. Searing descriptions of life in the early colonies and beyond, reminding us of the sacrifice of those on whose shoulders we stand. Nautical historical fiction at its best!” – Rear Admiral Steve Eastburg, United States Navy (Retired)

First to Fight – The Marines go to sea

“Meticulously researched, historically accurate and well written tale of the American Revolution and the operational birth of the U.S. Navy and Marine Corps team. With David Perry’s First To Fight, the reader steps back in time to meet the powerful personalities, little known patriot volunteers and their British opponents surrounding the 1775 birth of the United States Marine Corps in a Philadelphia tavern, the Continental Navy and the conduct of the first American naval expeditionary operation ‘from the sea’ against the British Colony of New Providence (Bahamas). An engaging and interesting read for all those interested in the history brought to life.” – Timothy Hanifen, Major General, US Marine Corps, Retired 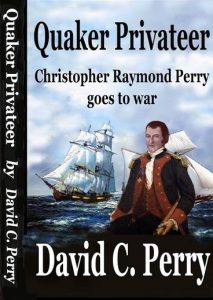 (For release in June 2019 ) Quaker Privateer is the story of young Christopher Raymond Perry’s early life. As a naval officer and privateersman, Perry was an intrepid character character and hero of the American Revolution.

Christopher’s eldest son, Oliver Hazard Perry, is eternally renown as the hero of the Battle of Lake Erie during the War of 1812. His younger brother, Commodore Matthew Calbraith Perry, is known in history as the man who visited Japan with a U. S. fleet of warships and opened the hermit country to commercial trade with western nations.

What does it feel like to be a young man caught up in war? What pain is wreaked on the undeveloped emotions of a youth thrust into the battles of men. If he is forced to kill, fight for his life, see his friends die, and suffer torturous imprisonment, how will he react? These experiences can destroy a young man, or they can temper him like steel in a furnace. Revolution at sea is a life that can take the boy raised to hard work, character, and integrity by his parents, and forge that person into a national leader. Such was the hero named Christopher Raymond Perry.