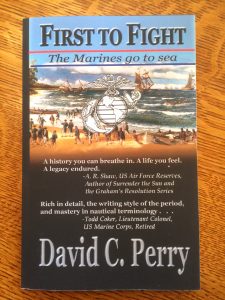 Real characters real stories – this make good fiction. All of my historical novels use the pattern of bringing real characters back to life. Look at this from my third novel, First to Fight.

This novel contains 144 characters, three of which are fictional and were created from the mind of the author. These purely fictional characters include Lawson Bellows of the Virginia Loyalist Navy, Finnestere, who is portrayed as Lord Dunmore’s butler, and Betty Hugg who is the fictional daughter of the real historical figure, William Hugg.

Colonel Henry Babcock of the Rhode Island Militia served in both the French and Indian War and the American Revolution. He was an eyewitness of the battle for Ticonderoga in the latter war. A lawyer from Yale, he was born in 1736. In April 1776, the Rhode Island legislature removed him from command of his troops because it determined he was mentally unstable. He died in October 1800 in New London, Connecticut.

The great-great-grandfather of President Theodore Roosevelt, Archibald Bulloch was born January 1, 1730, and died on February 22, 1777. He served as a delegate from Georgia to the second Continental Congress. He died in Savannah while preparing the defenses against British invasion.

A warrant officer in the Royal Navy, Coggins was Bosun on HMS Bolton. After the brig-sloop was captured, he was sent with his captain and two other shipmates to jail in Windham, Connecticut. They all escaped in a boat, but the other three drowned. Bosun Coggins was recaptured.

Isaac Craig was born about August 1741 in Hillsborough or County Down, Ireland. After moving to Philadelphia, he became a master carpenter and cabinetmaker. One of the original Marine Corps first lieutenants, he was assigned to the brig Andrew Doria in November 1775. He was promoted to captain in October 1776 and became a captain in the Army in March 1777, even serving in the War of 1812. He died in Ohio at age 85 May 14, 1826.

This site uses Akismet to reduce spam. Learn how your comment data is processed.